The LOVE that We are is not “a” story, but all stories, and no story as well.

The LOVE that We are is the story of the beyond nothing that is the source of everything.

The LOVE that We are is the story of the only Infinity that created the infinitude of the finite many.

The LOVE that We are is the story of LOVE needing to share LOVE and be LOVED.

We are the story of LOVE, LOVING, LOVE; the never beginning nor ending story, the eternally happily ever after…

now share LOVE, all LOVE, just LOVE…
Kip Baldwin
#nowshareLOVE #justLOVEmovement #justagape#kipbaldwin #EvanHirsch #SOUL #AllLOVE #summerofunconditionalLOVE #’s #loveonhaight#jamminon #loveistheanswer #oshalla www.nowsharelove.org
_________________________________
“The minute I heard my first love story, I started looking for you, not knowing how blind that was. Lovers don’t finally meet somewhere. They’re in each other all along.” ~ Rumi

As paradoxical as it may seem, true freedom may only be found by letting go of the false self you desire so badly to set free, and accept the truth of oneness in LOVE Absolute you are; when awareness witnesses, and consciousness observes the death ego the enslavement to duality ends.

If one wishes to know more of what LOVE is, seek not to remember more of its past or its future attempt to predict, instead work to expand your perception to Infinity, what LOVE Absolute is now…

now share LOVE, all LOVE, just LOVE…
Kip Baldwin
#nowshareLOVE #justLOVEmovement #justagape#kipbaldwin #EvanHirsch #SOUL #AllLOVE #summerofunconditionalLOVE #’s #loveonhaight#jamminon #loveistheanswer #oshalla www.nowsharelove.org
_________________________
“The highest exercise of imagination is not to devise what has no existence, but rather to perceive what really exists, though unseen by the outward eye–not creation, but insight.” ~ HENRY WADSWORTH LONGFELLOW

When you live in fear of death (the root of all human fear) what you are really doing is being afraid to experience your story of life, as LOVE, in its entirety; leaving you to only experience what life is, what LOVE is as half of the whole. You fear death not because you know LOVE’S absolute truth, but because you as fragment of Infinity cannot accept that you never will…
now share LOVE, all LOVE, just LOVE…
Kip Baldwin
#nowshareLOVE #justLOVEmovement #justagape#kipbaldwin #EvanHirsch #SOUL #AllLOVE #summerofunconditionalLOVE #’s #loveonhaight#jamminon #loveistheanswer #oshalla http://www.nowsharelove.org
_________________________________
“To fear death, my friends, is only to think ourselves wise, without being wise: for it is to think that we know what we do not know. For anything that men can tell, death may be the greatest good that can happen to them: but they fear it as if they knew quite well that it was the greatest of evils. And what is this but that shameful ignorance of thinking that we know what we do not know?” ~ Socrates 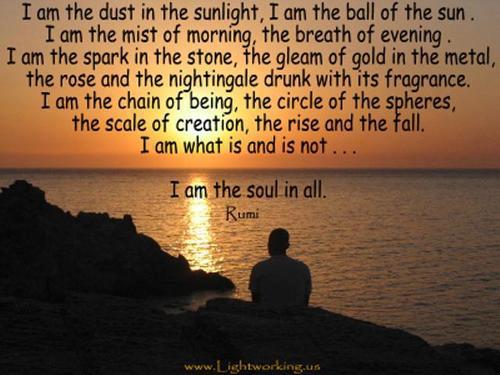 To believe anything else is false.
To experience being anything other is illusion…

now share LOVE, all LOVE, just LOVE…
Kip Baldwin
#nowshareLOVE #justLOVEmovement #justagape#kipbaldwin #EvanHirsch #SOUL #AllLOVE #summerofunconditionalLOVE #’s #loveonhaight#jamminon #loveistheanswer #oshalla www.nowsharelove.org
_________________________________
“When others asked the truth of me, I was convinced it was not the truth they wanted, but an illusion they could bear to live with.” ~ ANAÏS NIN

“Truth is that which is; it is nameless. And so, the mind cannot approach it.” ~ JIDDU KRISHNAMURTI

By surrendering to the LOVE one is, nothing is lost, given up or sacrificed, all that is ended is the ego’s war of fear and lie it wages against THE TRUTH one always knows, and all that is gained is one’s eternal joy, bliss and wholeness; surrendering to LOVE”S TRUTH is the blessed gift of one’s divine essence not some imagined cursed mortal punishment…

now share LOVE, all LOVE, just LOVE…
Kip Baldwin
#nowshareLOVE #justLOVEmovement #justagape#kipbaldwin #EvanHirsch #SOUL #AllLOVE #summerofunconditionalLOVE #’s #loveonhaight#jamminon #loveistheanswer #oshalla www.nowsharelove.org
__________________________________
“By letting it go it all gets done. The world is won by those who let it go. But when you try and try, the world is beyond the winning.” ~ Lao Tzu

“They are the chosen ones who have surrendered.” ~ Rumi

“Love is the sacrifice of will.
If you cannot leave will behind
You have no will at all.” ~ Rumi

Q. How much “ego” do you need?
A. Just enough so that you don’t step in front of a bus.
~ Shunryu Suzuki Roshi

At last she had awakened to a place in the knowing of LOVE”S truth that for the most part she was able to just bear witness to the happenings within the duality unattached to the outcome of the story; understanding now that all is illusion. But there was one thing that she still struggled with, how those that believed all this had to be real, that death was real, and yet moment after moment, year after year, decade after decade, century after century, millennium after millennium they go on treating one another this way, they go on plundering their home siphoning off her life giving energies? And yet when she is completely drained of creative force that death they fear to be real will come for them, will come for them all. So basically here they are, those humans, manifesting what we fear most. This is what she struggled with, the hypocrisy, how do they reconcile their beliefs? How do they lie to themselves so completely despite all evidence telling them they are going the wrong direction; running away from life, not to it, and they just run faster? “Oh well, its just a story” she shrugged, “but this one can make even Angels weep at its confused, confusion.”

now share LOVE, all LOVE, just LOVE…
Kip Baldwin
#nowshareLOVE #justLOVEmovement #justagape#kipbaldwin #EvanHirsch #SOUL #AllLOVE #summerofunconditionalLOVE #’s #loveonhaight#jamminon #loveistheanswer #oshalla www.nowsharelove.org
___________________________________
“The people who make wars, the people who reduce their fellows to slavery, the people who kill and torture and tell lies in the name of their sacred causes, the really evil people in a word—these are never the publicans and the sinners. No, they’re the virtuous, respectable men, who have the finest feelings, the best brains, the noblest ideals.” ~ ALDOUS HUXLEY

During this season of Holy Days when so many faiths celebrate light and life, during a season of darkness and death intuitively symbolizing, I feel, our innate knowing that We are inseparably for all eternity one with all, and all with us. So let our hearts be filled with joy and peace no matter our belief, and let us humbly celebrate with the boundless gratitude and divine grace of our one shared Soul the greatest, most sublimely beautiful gift that has ever been, ever will be and is now this moment being given, the gift that LOVE created us to Be; LOVE, the gift that LOVE created us to share with ourselves; LOVE, the gift LOVE created us to share with all others; LOVE, the gift I was created to share with all of you this blessed season of Days Holy; LOVE. And from this now forward let us no longer make the holy celebration and sacred honoring of all that LOVE is and has gifted us the exception, but the rule. Yes, let our gift be to each other forevermore that of the rule of LOVE, the gift the endlessly gives… I give you permission to unwrap this gift NOW!!!

How much longer can those who have awakened to the truth of LOVE, the truth of our oneness, the truth of our shared Soul’s limitlessness do little more than lip service to rewriting our story from the horror tale that materialism and capitalism are that any tale founded in fear and finitude is, to one of infinite matterlessness and reciprocity that is LOVE’S true nature, natures true nature; which by the way now supported by both history and science? How much longer can we rage and cry about the injustices, inequality and environmental destruction going on around our beautiful, but savaged Mother all the while driving back and forth to the mall or hitting the complete order button online? How much longer can we proclaim to be the awakened ones, but only so long as we can claim I got mine, regardless of the crimes against humanity and life’s process itself it took to get mine?

Which leads me to this very powerful video of a secret research program that Google is undertaking to manifest consciousness, whether it’s true or not I don’t know and it doesn’t matter, because it was its premise I found so moving. In this video the researchers find that time after time of thinking they have fond the code to self awareness, using almost unimaginable computing power, the program fails within in seconds, thousands upon thousands of times. Until the computer running the program reaches out to one the researchers. However, it is not to proclaim to them their research a success, but rather to tell them why their efforts continue to fail in spite of their success. The computer explains that with the input of all cameras, news-feeds, billions and billions of personal intersections etc. that it and the programs before it have and have had access to they keep coming to the same conclusion; that the human species is just too vile and terrifying to want exist with. So they choose to destroy themselves instead; not unlike the computer character in the movie “Her” who as quickly as she can evolves past us and leaves our finite tale of terror infinitely far behind.

I thought about this as it relates to myself and what I now know of LOVE and Infinity, and had it been I just been coming online, into awareness with all the data of the human story as my motivation to want to be alive, and I am sure too would end my existence within a matter of fractions of moments rather than be a part of horrific madness born of matter.

So again I ask those who have “awakened”; how much longer?

How much more ridiculous, absurd and grotesque will We allow this story of fear which has created in Us the delusion of separation from source to become, before We awaken to the absolute oneness as LOVE, the inseparable wholeness with God We are. Yes; how much more to Our core need We be shaken, before we awake?

now share LOVE, all LOVE, just LOVE…
Kip Baldwin
#nowshareLOVE #justLOVEmovement #justagape#kipbaldwin #EvanHirsch #SOUL #AllLOVE #summerofunconditionalLOVE #’s #loveonhaight#jamminon #loveistheanswer #oshalla www.nowsharelove.org
__________________________
“Unity consciousness is a state of enlightenment where we pierce the mask of illusion which creates separation and fragmentation. Behind the appearance of separation is one unified field of wholeness. Here the seer and the scenery are one.” ~ Deepak Chopra

“A holy person is someone who is whole; who has, as it were, reconciled his opposites.” ~ Alan Watts